Your browser is unsupported

We recommend using the latest version of IE11, Edge, Chrome, Firefox or Safari.

The Disappearing Coastlines of the 21st Century

On a research expedition in 2018, a group of oceanographers took a cruise in the remote northwestern Hawaiian Islands to study and predict how long a small islet in French Frigate Shoals would remain above sea level. Their hypothesis was 50 years. Three months later, Hurricane Walaka hit, and the 11-acre islet was gone.

According to Sean Vitousek, who studies oceanography as a UIC adjunct assistant professor in civil and materials engineering, complete wipeouts like this one are an anomaly, but the frequency of coastal flooding that can cause such dramatic events is about to increase at a faster rate than many people realize. That frequency, particularly due to sea-level rise, is the crux of one of his latest studies.

“We’re basically trying to figure out the timing, or the year in the future, when sea-level rise will cause some pretty dramatic changes in the frequency of coastal flooding,” Vitousek said.

For most coastal regions in the United States, that timing falls between 2050 and 2100, when sea levels will sit three to four feet higher than they are today—heights that the water now only reaches during extreme events such as hurricanes. Combine storms with this forthcoming higher baseline and you get an exponential increase in the frequency of flooding. As a rule of thumb for people living in coastal communities, Vitousek said, “take whatever you’re experiencing now and double it.”

To calculate frequency projections, Vitousek and his team—UIC PhD candidate Mohsen Taherkhani (MS ’18), Patrick L. Barnard from the U.S. Geological Survey, and Tiffany R. Anderson, Charles Fletcher, and Neil Frazer from the University of Hawaii—collected tide gauge data from 200 stations around the United States that record water levels every hour. In more than 70 percent of the stations in coastal cities, they discovered levels that would project a 50-year flood—the type of flood with a 2 percent probability rate in any given year—at least once a year before the year 2050. By 2100, for 93 percent of cities, a 50-year flood would happen every day at high tide.

Why a 50-year flood in particular? That is the storm that engineers design infrastructure to withstand, Vitousek explained. “I think any way you look at it, though, we’re going to have real dramatic changes.”

Those dramatic changes are hard for many people to grasp. “A lot of the time we’re playing a waiting game when it comes to climate-change impacts, particularly related to sea-level rise,” Vitousek said.

“It’s a slow process, but it’s accelerating. You may have a large flooding event that happens once every decade. That’s something you could probably manage—and you’re going to forget the impacts. But if that event happens every year, or multiple times a year, you’re not going to be able to ignore those.”

Vitousek’s predictions underscore the immediate need for action, and they are based on sea-level rise alone. That’s not even accounting for the other factors at play. Warmer temperatures and heavy rain are a couple of them; both can affect a larger geographic area than the coasts.

Richard Fisher (BS ’93), a senior civil engineer who works on stormwater mitigation for the Metropolitan Water Reclamation District of Greater Chicago, says rainfall in Illinois has increased by one inch in the past year, but the current infrastructure, which was last updated in the 1970s, can’t keep up with the amount of rainfall.

“People tend to think once you get water in the ground, you shouldn’t have to think about it. It’s just something that’s naturally taken care of,” Fisher said. “But that’s not the way it works.”

Since 2004, the water district has participated in 130 mitigation projects in Cook County that have cost a combined $200 million. Whether Fisher is completing a pond project or adding permeable pavement to a parking lot, he aims to bring more attention to stormwater infrastructure.

Drainage ponds and absorbent asphalt are among the more pedestrian approaches that cities can pursue to cope with the rising water all around us. They may seem insignificant, but each represents a step away from the most drastic of circumstances that could face U.S. municipalities.

“I think about moving New York City,” Vitousek said, referencing a worst-case mitigation plan that some scientists and urban planners have considered in theory. “That is pretty much never going to happen.” But at some point, he said, certain places may not have a choice. 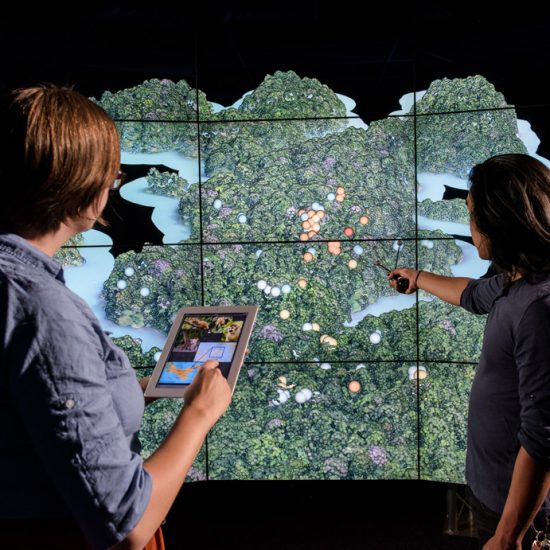 Getting climate change to hit home

Climate-change findings like Sean Vitousek’s can be hard to fathom and harder to accept, but technology can help. Andy Johnson, professor of computer science and director of research at UIC’s Electronic Visualization Laboratory, weighs in on how visualization in particular can help communicate information that is difficult to grasp.